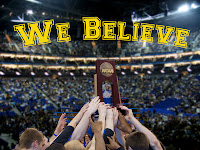 Washington Crossing, PA December 30, 2011 – Producer, director, Robert Child, has optioned the completed feature screenplay, WE BELIEVE, from Los Angeles, CA, based writer, Daniel Drennon. The script is Drennon's eighth feature length screenplay since moving to Los Angeles after graduating from Duke University.  He previously optioned CAR WASH 2 to Universal Pictures and UNDER COLOR OF LAW to the Mount Kramer Company. WE BELIEVE, originally under consideration by faith-based market leader, Cloud Ten Pictures, Inc., (LEFT BEHIND, THE MOVIE) has now been put on the fast track.
André van Heerden, President of Film Production at Cloud Ten, maintains a strong interest in seeing the project come to market and has inked a letter of intent with Child’s production company, Rob Child & Assoc., to potentially produce and spearhead a platform release for the film "It's a wonderful true story that Daniel has translated well on to the page," says van Heerden.  "We're excited about Robert taking it on and being part of the process."
A riveting, HOOSIERS meets FACING THE GIANTS sports drama, WE BELIEVE, is the true story of the Barton Bulldogs remarkable 2007 NCAA Division II national championship season. The team, led by Coach Ron Lievense, a man of tremendous personal faith, featured first-team All America player Anthony “Ant” Atkinson, a lightning-quick 5’ 10”, 140 lb. point guard who was not offered a scholarship by any elite Division I basketball program because of his size. The Barton Bulldogs recovered from a devastating overtime loss to the eventual national champion Winona State Warriors in the 2006 Elite Eight playoffs, to become a team of destiny the following season winning a record nine overtime games with no losses. In a dramatic rematch the Bulldogs again faced undefeated, #1 ranked, Winona State for the 2007 national championship.
“I had been looking for a “basketball story” to direct for several years after I had written the treatment for 13 RULES about the origins of basketball. Basketball is a game founded in faith. James Naismith, its originator was an ordained minister and taught at the Springfield MA, YMCA. So the fact that WE BELIEVE is a faith-based story seems completely natural to me”, Child said.
Child and Drenon will travel to North Carolina in early January to meet with Barton officials, coaches and many of the players from the 2007 championship team. They will begin identifying resources and establish the groundwork for the project. “I hope to work with as many local area resources in North Carolina as possible and intend to film in as
many of the actual locations as we can. There is no substitute for staying as true to the story as possible and I know the support and enthusiasm from the local community for this movie is huge”, Child commented.
About Robert Child
Originally from New England, Child has won numerous filmmaking awards including the GI Film Festival’s Founders Choice Award (The Wereth Eleven), five Telly, two CINE Golden Eagles, Best Director at the New York Independent Film Festival, and Special Jury at World Fest Houston. In 2011, Child was selected to receive the highly coveted Lifetime Achievement Award in the Arts from the Bucks County Chamber of Commerce. His work has also been named as an “Official Selection” at major United States film festivals including the New York Independent Film Festival and the Washington DC Independent Film Festival. Click here to view Child’s Director Reel.
About Cloud Ten Pictures, Inc.
Cloud Ten Pictures was founded in 1996 by brothers Peter and Paul Lalonde. The company is a market leader in the production and marketing of faith-based films. It's 2000 release of LEFT BEHIND: THE MOVIE, was the top-selling independent video of that year and opened in theaters on 850 screens. Cloud Ten has produced and distributed 8 successful feature films, numerous documentaries and acquisitions and has strong distribution arms through E1 Entertainment and CNI as well as through Cloud Ten Church Cinemas. The Financial Post labeled it “one of the most successful independent
studios in the English-speaking world.”
For press information, contact:
Rob Child & Associates, LLC
www.robchild.net
(215) 369-1453
robchildassoc@gmail.com
Friday
Posted by Robert Child
0 Comments
Tag : Film
NEXT PREV HOME