►
Recently I had the opportunity to attend my first WWII reenactment. I have been at countless Civil War and Rev War reenactments but never WWII. But in my opinion I started with the best WWII reenactmcnt out there the annual D-Day reenactment at Conneaut, Ohio http://www.ddayohio.us/

I was there to immerse myself in the time period as well as to get a sense of the general audience enthusiasm for WWII. You couldn't have gotten a more patriotic or enthusiastic crowd. Those in attendance were lovers of history and appreciative of WWII vets in particular. And I heard an announcement at the event that there were over 150 WWII vets in attendance. This event was massive but very well run and incredibly free of any admission charge. Yes, free. All the town asked for was a donation which I gladly gave. The event site is situated on the shores of Lake Erie an hour east of Cleveland in the Conneaut Town Park. The terrain actually mimicked Normandy as the park is on a high bluff overlooking the lake. And Erie being one of the "great lakes" after all looks like the ocean or the English Channel. 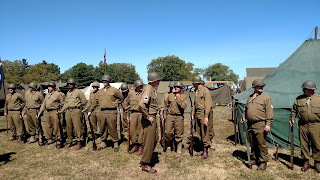 The most striking difference between the troops at this event and those at a Civil War event was the age. WWII Reenacting is still a young hobby and I saw many younger troops especially on the German side. Yes, they had a full German encampment with SS troops and the works. Since I am writing the WWII story, Blood and Armor, for the Ardennes Group I was very heartened to see this younger enthusiasm for the history and the time period.

The event itself was exciting. Prior to the the American troops landing on shore in the Higgins boats and other crafts the Germans fired a working 88mm gun as well as a flak wagon and MG 42 machine guns. They used these to "fire" on the troops landing. But what was ultra cool is they had American P-47 strafing the beach as well as bombers. And I even thought I caught sight of a Liberator. I took a very short video with my phone which is the reason I wanted to publish this post. My camera work is nothing to write home about but this clip gives you a sense of being there.  Enjoy!