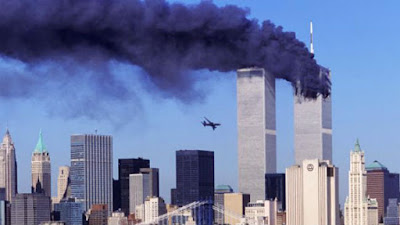 I almost did not write this post as I had second thoughts but I felt I wanted to share my memories fifteen years on. On 9/11/2001 I was right in the thick of it in a production studio in Manhattan. It was a beautiful cloudless Tuesday which on occasion I can recall as vividly as if it were yesterday.

As I mentioned I was at a TV studio preparing to do The People's Court television show before all hell broke loose. In the control room we watched the mayhem unfold. In fact I vividly recall watching Channel 4 News in a live report from the World Trade Center area when during the actual live report the second plane hit the second tower. The shocked reporter just took off running and so did the cameraman.

Cell phones did not work. Neither did landlines for that matter. The only way I got word to my wife about my situation was sending an email via AOL. Does anyone have AOL anymore? I had no idea if the email would reach her.

In the studio we simply did not know if we should stay or go. What was safer choice? After the plane hit the Pentagon the director turned to me and waved goodbye adding, "Good luck, get home safe." Home for me at the time was Bucks County, PA, 90 minutes to the south via Penn Station. So I headed in that direction. The studio was at 37th Street and 5th Ave. and I could look south and see the brown smoke rising above the towers. As I walked toward Penn Station I passed by several churches with hastily posted signs on which someone scrawled with a sharpie, "Come in and Pray." At one church I saw people actually kneeling on the sidewalk praying.

As I got to Penn Station it was bedlam but I saw a line of people going down an escalator onto a train. I joined them. I didn't care where the train was going - just out of Manhattan. As I got on and actually got a seat before the aisles filled up there came an announcement, "Attention all passengers by order of the NYPD, Penn Station is now closed. All must exit to street level and exit the building."

A collective groan was heard on the train as we all made our way out. My next thought was - water. There must be a boat I could get on. So I headed up 8th Ave. then onto 10th. Coming toward me down the avenue were thousands of people headed to Penn Station. As I made my way up 10th my next thought was cash. I was going to take as much cash out of an ATM as I could before they too were shut down. I dashed in a deli and took out as much as I could and then continued north.

Once I got to 12th Ave. I saw a line of about 500 people waiting to get on a Circle Line boat. I jumped right in behind them. We all boarded. The stuffed to the gills ship slowly pulled away from the dock. At that moment there was almost an audible sigh of relief. The boat was headed over to Weehawken, NJ and you could turn and look across the Hudson and see the Towers engulfed in brown smoke. You could also smell it. It smelled like an electrical fire. People on the boat were actually joking around trying to mask their fears. No one knew what the hell was going to happen next but at least we were off Manhattan.

When we docked at Weehawken I ran to a payphone to see if it had a dial tone. It did. I dialed my voicemail and heard a message from my now ex-wife that I will never forget. I will not detail it just to say it was filled with tears. I was able to call her back and told her I would try to grab a train from Hoboken.

I headed down there with thousands of others and the trains were going nowhere. At the station they had set up hundreds of gurneys with IV poles awaiting trains from the Trade Center. Trains that would never come. It was an image I'll never forget. But that was not the final enduring image I would remember from that day....the one that still gives me chills and I will never forget.

After leaving the train station I headed up to a Cuban bar / restaurant. I thought a beer was just what I needed at that point. There were actually only a few people in the place and at the bar. After a few moments a near hysterical woman who had to be 8 months pregnant ran in with someone who had to be her mother. Through her tears I overheard her say to her mother, "his last words were he'd meet us here." I turned to the bartender and he looked back at me, we were both speechless. The pregnant woman then headed into the Ladies room as the Mom stood by the bar.

As I turned to continue watching Peter Jennings anchor the coverage on the TV behind the bar a man bolted in who was covered with the dust. It was the same dust which had covered people who were seen on TV running from the towers. As the man came in the Mom started crying and they embraced. The bar fell silent. Then the pregnant woman emerged from the bathroom, saw her husband and ran towards him crying, overjoyed. No one in the place moved and many including myself teared up. It was scene I will remember till I die.

Several hours later the trains began to run and I was able to get one to Montclair where my wife met me. I don't remember what we said to each other we just held each other tight for a long moment before heading back to Pennsylvania.

Did the world change that day? Without a doubt. Did it change for the better? For a short while it did in the aftermath. We were united as one people and a nation that was wounded and hurting. Can we look back from today and say that we have grown or are safer as a nation? I am not certain we can. In many ways the world is much less certain and certainly much less innocent than before 9/11/2001.

But it remains up to us to make it the world in which we all want to live. And by live I mean live in peace. I am a spiritual person and I believe that the dark forces in this world have increased the level of terror and violence that they spread because they know their days are numbered.

More and more common everyday people especially those in the Middle East simply want to live their lives and raise their families in peace. The time is coming soon when killing in the name of God or Allah will not be tolerated, promoted or accepted by people of any faith on the planet. When that day comes...and I truly believe I will see it in my lifetime then finally there will be lasting peace on earth.