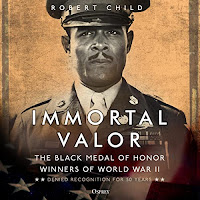 The remarkable story of the seven African American soldiers ultimately awarded the World War II Medal of Honor, and the 50-year campaign to deny them their recognition.
In 1945, when Congress began reviewing the record of the most conspicuous acts of courage by American soldiers during World War II, they recommended awarding the Medal of Honor to 432 recipients. Despite the fact that more than one million African-Americans served, not a single black soldier received the Medal of Honor. The omission remained on the record for over four decades.
Available:
iTunes
Audible 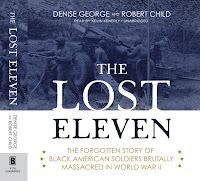 Available from Blackstone Audio, The Lost Eleven, on audiobook. Below are links to buy at various retailers.
Blackstone (Downpour Audio)
Audible
iTunes


5 Star Listener Review:
"Inspiring"
"This is a compelling true story of eleven African American soldiers who having served the country well with their heroism and honor in the battlefields of World War II only to be massacred in the town of Wereth, Belgium by the Nazis, is truly a tragic story. The authors present the characters through many interviews with fellow soldiers and family members, read with expertise by Kevin Kenerly. The saddest part is that these brave African Americans went unrecognized for 70 years. They finally receive the honor they deserved in 1994 with a monument being erected for their bravery in the town of their executions, Wereth, Belgium, citing all the honorable service other African Americans gave to the US in its war against German. A must listen book for anyone interested in just how mistreated some or our fighting men’s legacy has become."