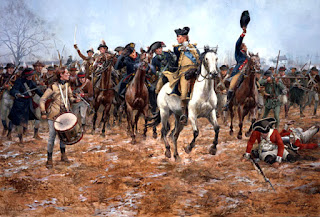 I am pleased to announce I am attached to write and direct the forthcoming feature film, George Washington and Me: Elijah's Long Journey Home, being commissioned by Virginia-based 1663 Media Arts, LLC

The story follows 10-year-old Elijah and his adventures as he follows his father, a farmer who joins the 6th Pennsylvania Regiment after the British invade their family farm. It is best described as "The Patriot meets Disney." The adventure begins when Elijah sneaks out of George Washington's encampment to find his father, a soldier who does not return from the Battle of Monmouth.

The project is in the fundraising stage now and I'd like to invite you to visit the crowd funding page and learn more about this wonderful historical film.

CHECK OUT THE FUNDING SITE.

I am excited to again be working with John Koopman who will be playing General Washington. John was our George Washington in, America's First D-Day, and has done extensive work with Mount Vernon in Virginia.

The film is being planned to shoot in Virginia at several historic locations outside Richmond and Williamsburg. I have begun the script which is being adapted from the book, George Washington's Army and Me: Elijah's Long Journey Home by Michael Dooling.

Chef Staib and 1663 Media Arts will host a "Meet the Filmmaker's" Evening at City Tavern in Philadelphia this November 15th from 6 - 9pm.

18th Century Period Clothing, Food and Drink will add ambiance to the evening along with the film's cast, crew and Historical Stories by Chef Staib and General George Washington himself! Limited opportunities are available to Sponsor of this Fine Event. Chef Staib has a role in the film as the Officer's Cook.

Staib said, "I am very excited to be a part of this amazing project! History is what I live for and when I heard about this film project, I was immediately inspired. The creative story, the incredible talent both behind and in front of the camera and history being brought to life; this film is sure to be spectacular!"

Producer, Andrea M. Clarke shared, "Chef Staib and his keen enthusiasm and knowledge of all things 18th Century Food, Drink and more, is a natural addition to our 18th century period film. He sees our vision to bring this family-friendly adventure to the big screen with a goal to reignite the interest of people young and old to learn more about the real life characters surrounding our freedoms and the founding of the United States of America. Our film is steeped in family, home and freedom, and how through resilience and determination, the human spirit can and will prevail. And, it's a story the whole family will enjoy!"

For a limited time, the story that inspired the film can be downloaded through the film website. http://GWArmyAndMe.com