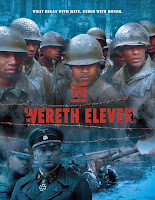 On October 16, 2017 the US Senate passed Resolution S.99 honoring after 73 years the sacrifice and service of The Wereth Eleven. The Resolution now moves onto the House where full passage is expected. Needless to say this has been quite a long time in coming. I am very proud of our entire Wereth team and the small part we played in helping to shed light on this terrible war crime.

The book I coauthored, The Lost Eleven, was optioned in August for a major motion picture. This will bring this story to an even wider audience and remind Americans of the sacrifices made in the name of freedom by African Americans during WWII.


RECOGNIZING THE 11 AFRICAN-AMERICAN SOLDIERS OF THE 333RD FIELD
ARTILLERY BATTALION WHO WERE MASSACRED IN WERETH, BELGIUM, DURING THE BATTLE OF THE BULGE

Mr. McCONNELL. Mr. President, I ask unanimous consent that the Senate Armed Services Committee be discharged from further consideration of S. Res. 99 and the Senate proceed to its immediate consideration.

The PRESIDING OFFICER. Without objection, it is so ordered.
The clerk will report the resolution by title.
The senior assistant legislative clerk read as follows:

A resolution (S. Res. 99) recognizing the 11 African-
American soldiers of the 333rd Field Artillery Battalion who
were massacred in Wereth, Belgium, during the Battle of the
Bulge in December 1944.

There being no objection, the Senate proceeded to consider the
resolution.
Mr. McCONNELL. Mr. President, I further ask unanimous consent that the resolution be agreed to, the preamble be agreed to, and the motions to reconsider be considered made and laid upon the table with no intervening action or debate.


You can read more about the Senate passage and Joe Manchin's part in the bill at this link CLICK.
Thursday
Posted by Robert Child
0 Comments
Tag : War and Military, Wereth11, WWII
NEXT PREV HOME