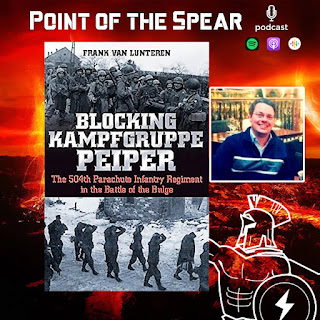 Join Robert Child for a conversation with author Frank van Lunteren. Frank was born and raised in Arnhem, the Netherlands. His interest in military history dates to the 1980’s, when as a child he first visited the Airborne Museum in Oosterbeek. He went on to study political history at the Radboud University in Nijmegen, while privately researching the exploits of American paratroopers. He’s written a trilogy of books about the 504th PIR with a 4th book planned in the spring.

Purchase this book and help support your local book store at the link below.

Christmas Week on Point of the Spear 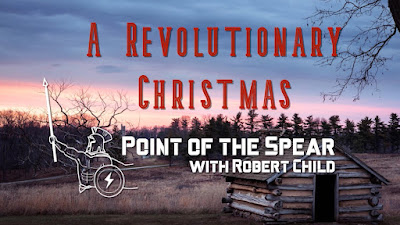 It's a Revolutionary Christmas on Point of the Spear. First, on December 22nd join Robert Child for a conversation with Managing Editor of the Journal of the American Revolution Don Hagist. Don is an independent researcher specializing in the demographics and material culture of the British Army in the American Revolution and has published a number of articles in academic journals.
Then on Christmas Eve and Christmas Day. Point of the Spear Special Presentation The Christmas Crossing.
Late December 1776 – A ragged Continental army has now put an icy river between themselves and the pursing British army. The men in blue and buff uniforms have known nothing but defeat and had once again made a narrow escape while the Congress at Philadelphia reflecting no confidence in their troops prepare to evacuate to Baltimore. Washington’s besieged men reflect the state of a nation weary of war and a cause on the brink of extinction. They are an army in waiting - waiting for ammunition, blankets and reinforcements. But others, nearly half, are simply waiting for their enlistments to be up on January 1, 1777. Within days Washington would have no men with which to fight and the cause and the dream of independence would be over. This is the backdrop of one of the most daring surprise attacks in American history - Washington's crossing of the Delaware and the subsequent victory at Trenton. Told in an urgent narrative style, Washington's Crossing: America's First D-Day, reveals the cast of characters and many untold aspects of the Crossing that made the victory even that much more incredible.
This presentation is part of a much longer audiobook. America’s First D-day available at the links below.
Audible.com USA
https://www.audible.com/pd/B00F3HX1LK/?source_code=AUDFPWS0223189MWT-BK-ACX0-010526&ref=acx_bty_BK_ACX0_010526_rh_us
Audible.com UK
https://www.audible.co.uk/pd/B00F3HZ6HW/?source_code=AUKFrDlWS02231890H6-BK-ACX0-010526&ref=acx_bty_BK_ACX0_010526_rh_uk
Thank you for listening and Happy Holidays!
Saturday
Posted by Robert Child
0 Comments
Tag : American Revolution, podcast, Point of the Spear 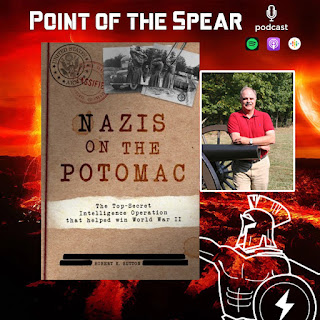 Join Robert Child for a conversation with retired National Park Service historian and author Robert Sutton about his book, Nazis on the Potomac: The Top-Secret Intelligence Operation that Helped Win WWII. Sutton  guest spent 33 years with the National Park Service and retired recently as their Chief Historian.

Purchase this book and help support your local book store at the link below. 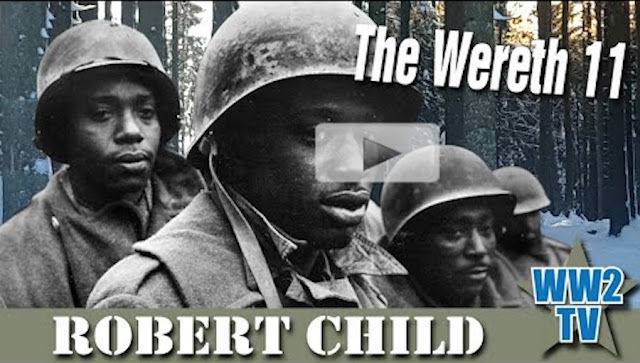 This coming Wednesday December 15th at 2P EST watch Robert Child in conversation with host Paul Woodadge on WW2TV on Youtube. Robert will be discussing his landmark film, The Wereth Eleven, which aired on National Geographic Channel.

The story, which was told on film subsequently became the book, The Lost Eleven co-written with Denise George.  WATCH BELOW.

Shortly after the outbreak of Hitler's Ardennes Offensive or Battle of The Bulge in 1944, members of the all-black 333rd Artillery Battalion were just eleven miles behind the front lines. With the rapid advance of the Germans the 333rd was ordered to withdraw further west but C and Service Battery were ordered to stay behind to give covering fire to the 106th Infantry Division.On Dec 17th the 333rd were overrun with most killed or captured. The remnants of the unit were ordered to Bastogne and incorporated into its sister unit the 969th Field Artillery Battalion. Both units provided fire support for the 101st Airborne Division in the Siege of Bastogne, subsequently being awarded the Presidential Unit Citation.11 soldiers, however, from the 333rd were separated from the unit shortly after they were overrun by the Germans. These men wound up in the little Belgian hamlet of Wereth, just 25 kilometers southwest of Malmedy, Belgium, site of another much more well known WWII atrocity.At about 3 pm on Dec 16, 1944, the 11 men approached the first house in the nine-house hamlet of Wereth, owned by Mathius Langer. A friend of the Langer's was also present. The men were cold, hungry, and exhausted after walking cross-country through the deep snow. They had two rifles between them. The Langer family welcomed them and gave them food. But this small part of Belgium did not necessarily welcome Americans as “Liberators.” This area had been part of Germany before the First World War and many of its citizens still saw themselves as Germans and not Belgians.

Word leaked out from a Nazi sympathizer in the area that the men had been sheltered and were hiding in the Langer home. When the SS troops approached the house about 4 pm that day, the eleven Americans surrendered quickly, without resistance. The Americans were made to sit on the road, in the cold, until dark. The Germans then marched them down the road and gunfire was heard in the night. In the morning, villagers saw the bodies of the men in a ditch at the corner of a cow pasture. Because they were afraid that the Germans might return, they did not touch the dead soldiers. The snow covered the bodies and they remained entombed in the snow until January when villagers directed members of the 99th Div. I&R platoon to the site.In the official US Army report it was revealed that the men had been brutalized, with broken legs, bayonet wounds to the head, and fingers cut off. And It was apparent that one man was killed as he tried to bandage a comrade's wounds.In 2001, three Belgium citizens embarked on the task of creating a fitting memorial to these men and additionally to honor all Black GI’s of World War II. With the help of Norman Lichtenfeld, whose father fought and was captured in the Battle of the Bulge, a grassroots publicity and fund-raising endeavor was begun. The land was purchased and a fitting memorial was created There are now road signs indicating the location of the memorial, and the Belgium Tourist Bureau lists it in the 60th Anniversary “Battle of the Bulge” brochures. The dedication of the memorial was held in 2004 in an impressive military ceremony.It is believed that this is the only memorial to Black G.I.s, and their units, of World War II in Europe. Norman's goal is to make the Wereth 11 and all Black G.I.’s “visible” to all Americans and to history. They, like so many others, paid the ultimate price for our freedom. Please visit his site www.wereth.org where you can learn more about this dark and virtually unknown chapter from WWII.

Katja Hoyer Comes to Point of the Spear 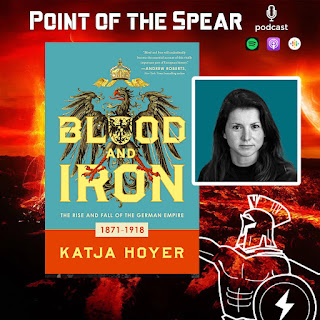 Join Robert Child for a conversation with author Katja Hoyer about her book, Blood and Iron. Hoyer is a German-British historian specializing in modern German history. She was born in East Germany and is a Fellow of the Royal Historical Society in London, a Visiting Research Fellow at King's College London, and has written for the Washington Post, History Today, and the BBC's History Extra. 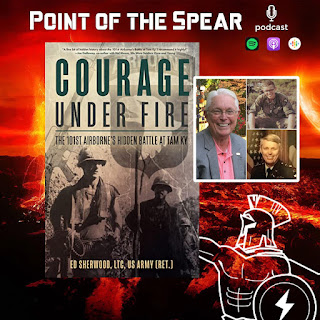 Join Robert Child for a conversation with author and retired US Army LTC Ed Sherwood about his book, Courage Under Fire. Sherwood led an infantry platoon at Tam Ky in Delta Company, 1st Battalion, 501st Infantry, fighting with the 1st Brigade, 101st Airborne Division He was wounded in action on June 2, 1969. After Vietnam, he continued serving as an infantry officer He retired from active duty as a Lieutenant Colonel in 1988 due to medical reasons.

Watch the full Video Podcast of Point of the Spear with Author John C. McManus 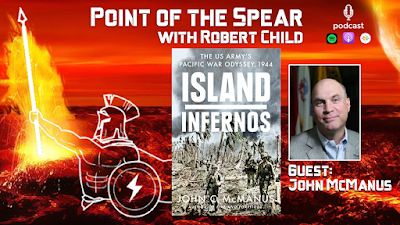 Join Robert Child for a conversation with author John C. McManus about his new book, Island Infernos. McManus is one of America’s leading military historians, and a recipient of the prestigious Gilder Lehrman Prize for Military History. He is in demand as a speaker and expert commentator on CNN, Fox News, Discovery, Smithsonian Channel and many other networks.
Watch the full video podcast of the episode below. 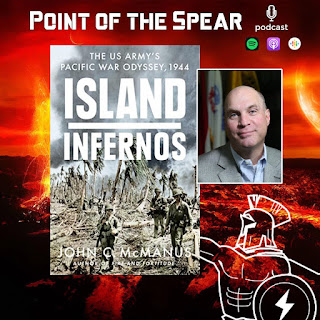 Join Robert Child for a conversation with author John C. McManus about his new book, Island Infernos. McManus is one of America’s leading military historians, and a recipient of the prestigious Gilder Lehrman Prize for Military History. He is in demand as a speaker and expert commentator on CNN, Fox News, Discovery, Smithsonian Channel and many other networks. Watch this interview as a video podcast at this link https://youtu.be/vi_6EoQx2f4