All Titles Now in Print

►
Last month after seeing increasing sales of the few ebook titles I had in print format I created print versions of all my remaining books. Not an easy process but I had to remind myself people still like to read stories on paper. I myself purchase some books in print instead of ebook format so I can hold the book in my hand. I don't think print will ever completely go away like shooting movies on 35mm and 70mm film. It is simply a choice now. Although for the life of me I don't get the "return to vinyl" for albums. Playing records on a turntable to me was always such a pain. Plus every time the record is played you grind more plastic out of the groove making the recording sound worse. Skips, scratches and pops...this is desired? Oh well.

So when you're not playing your 33s and 45s pick up a copy of one of my titles in print format. Below are two of my best sellers and links to purchase them in print. Enjoy. 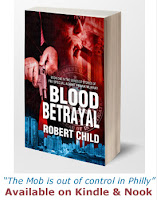 The bodies are piling high—36 unsolved gangland murders at last count—and FBI Supervisor Hans Bauer has to do the unthinkable: put tough, independent Special Agent Frank Murray back on the squad he was twice kicked out of, Organized Crime. Mafia Kingpin Nick Scarponi is back from prison and orchestrating the bloodiest reign of mob killings in Philadelphia history and Frank Murray, who tossed Scarponi in the can three years earlier, is his #1 target. The taunt, tense, visually gritty story leaps off the page and grabs you by the throat. The action-packed tale could only be crafted by someone who knows the art of cinematic pacing—acclaimed Director and Emmy® nominated filmmaker, Robert Child. Blood Betrayal is a classic, big city mafia crime story that cuts to the bone. It feels all too real because it is. The story is based on an historic FBI prosecution and investigation led by Charles "Bud" Warner the real life Frank Murray. FBI Director William Sessions, Attorney General Janet Reno and President Bill Clinton commended him for his extraordinary work on this case. Blood Betrayal is a thrill ride of twists and turns and vividly drawn characters such as "Center City" Charlie, mob con man Nick “The Crow” Consiglioni and Murray's wife, Marlene, a gold-digger whose affair with a doctor is brought to a screeching halt by Murray in a scene that has to be read to be believed. Former Philadelphia resident and director David Lynch chillingly described the city during the time of Blood Betrayal: "It was a very sick, twisted, violent, fear-ridden, decadent, decaying place. I felt like I was constantly in danger. But it was so fantastic at the same time. The people had stories etched in their faces."  Purchase IN PRINT.

How Canada Won the Great War

For 100 years Canada's role in ending WWI sooner than anyone thought possible has gone largely unrecognized. Canadian soldiers unlike British "city boys" hailed from hard scrabble farms and logging camps. Their natural survival and hunting instincts were exactly what the Great War required. The Canadian Corp on the Western Front led by Currie, became the premiere allied fighting force. The fact that Canada was not yet a formalized nation but a Dominion at the close of the war may be the reason for the absence of recognition yet the record of the Canadian WWI military accomplishments is irrefutable. Currie took over command of the Corp after the ill conceived Somme operation and executed a brilliant strategy which led to Canada's greatest military triumph of WWI at Vimy Ridge. Purchase IN PRINT.
Saturday
Posted by Robert Child
0 Comments
Tag : Blood Betrayal Excerpts, New Releases, WWI
NEXT PREV HOME