Join Robert Child for a conversation with Mark Greaney about his book Sierra Six. Mark is a #1 NYT best selling author of over 16 thrillers He has written or cowritten seven Tom Clancy novels and the Audible Original Audio Drama, Armored which has been optioned for film by Sony Pictures. He lives in Memphis with his family.

Join Robert Child for a conversation with author Carole Engle Avriett about her book Marine Raiders: The True Story of the Legendary WWII Battalions. Carole grew up in a military family. She graduated from the University of California, Davis, with a double major BA in English and History, specializing in Military History. She served as the Homes Editor with Southern Living Magazine for nearly 15 years. *This episode is dedicated to Edwin "The Swede" Blomberg, WWII Marine Raider. 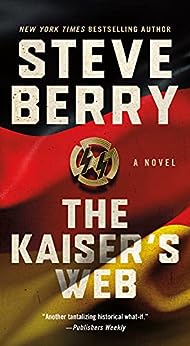 Join Robert Child for a conversation with author Steve Berry about his book The Kaiser’s Web. Steve is the New York Times and #1 internationally bestselling author of the Cotton Malone novels, among other books. He and his wife are the founders of History Matters, which is dedicated to historical preservation. He serves as an emeritus member of the Smithsonian Libraries Advisory Board and was a founding member of International Thriller Writers, formerly serving as its co-president. 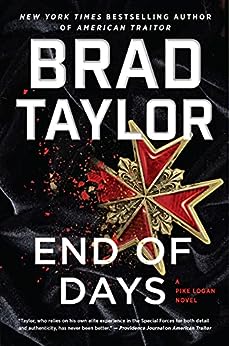 Join Robert Child for a conversation with author Brad Taylor about his book End of Days. Brad is a twenty-one-year veteran of the U.S. Army Infantry and Special Forces, including eight years with Delta Force. Taylor retired in 2010 after serving more than two decades and participating in Oper-ation Enduring Freedom and Operation Iraqi Freedom. He has written fifteen New York Times bestsellers and is a security consultant on asymmetric threats for various agencies. He lives in Charleston, South Carolina, with his wife and two daughters.
March 5th - Marc Liebman 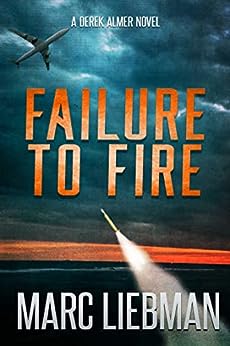 Join Robert Child for a conversation with author, Marc Liebman about his book Failure to Fire. Liebman is a retired U.S. Navy Captain and Naval Aviator who is a combat veteran of Vietnam, the tanker wars of the 1980s and Desert Shield/Desert Storm. He retired as a Captain after twenty-six years in the Navy and a career that took him all over the world. 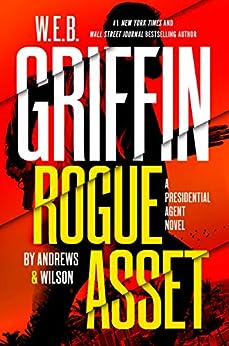 Join Robert Child for a conversation with Andrews and Wilson about their book, Rogue Asset.

W. E. B. Griffin was the author of seven bestselling series: The Corps, Brotherhood of War, Badge of Honor, Men at War, Honor Bound, Presidential Agent, and Clandestine Operations. He passed away in February 2019.

Brian Andrews is a U.S. Navy veteran, Park Leadership Fellow, and former submarine officer with a psychology degree from Vanderbilt and a masters in business from Cornell University.Jeffrey Wilson has worked as an actor, firefighter, paramedic, jet pilot, and diving instructor, as well as a vascular and trauma surgeon. He served in the U.S. Navy for fourteen years and made multiple deployments as a combat surgeon with an East Coast-based SEAL Team. He and his wife, Wendy, live in Southwest Florida with their four children.

Join Robert Child for a conversation with RJ Patterson,  R.J. Patterson is an award-winning writer and thriller author living in the Pacific Northwest. While growing up in a military family, he spent some of his formative years living with his family on the estate of an English baron and baroness. It was there that he developed his passion for good literature and an appreciation for football.

Join Robert Child for a conversation with Bruns and Olson. J .R. Olson graduated from Annapolis in May of 1990 with a BS in History. He served as a naval intelligence officer, retiring in March of 2011 at the rank of commander. His assignments during his 21-year career included duty aboard aircraft carriers and large deck amphibious ships, participation in numerous operations around the world, to include Iraq, Somalia, Bosnia, and Afghanistan, and service in the U.S. Navy in strategic-level Human Intelligence (HUMINT) collection operations as a CIA-trained case officer.

David Bruns earned a Bachelor of Science in Honors English from the United States Naval Academy. (That's not a typo. He's probably the only English major you'll ever meet who took multiple semesters of calculus, physics, chemistry, electrical engineering, naval architecture, and weapons systems just so he could read some Shakespeare. It was totally worth it.) Following six years as a US Navy submarine officer, David spent twenty years in the high-tech private sector.
March 30th - Angus Wallace
Join Robert Child for a conversation with Angus Wallace. Angus hosts the long-running WW2 Podcast. The WW2 Podcast is dedicated to the military history of the Second World War. Hosted by a British host, Angus Wallace, the show launched back in 2015 and has gone on to release more than 65 episodes. Throughout the ongoing series, Wallace has covered a range of WWII topics, from Churchill’s decision to join the war in 1940, to the famed Nazi Hunters, to the Normandy landings. Wallace reinforces his episodes with interviews of authors and military experts, who help to paint in the finer details of the events, battles and people that contributed to the war. 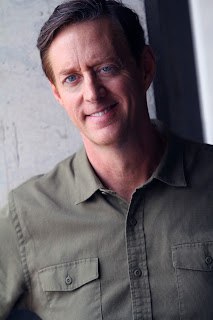 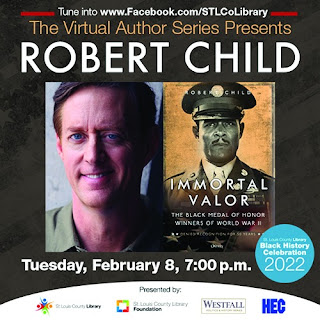 February 8th at 7P for Back History Month I hope you'll check out my  virtual author event with the St. Louis County Library on my new WWII book, Immortal Valor.  WATCH ON FACE BOOK

"This book and its inspiring stories merits reading by soldiers, and all Americans, because so many of us still conceive of the world wars as “white” wars, fought and won by white men, an image and impression that standard books and movies still convey. African Americans have fought in every war that the Colonies and the country have waged, and a significant way to impress this fact on all ranks, and all Americans, is for them to read such a book."
–ARMY Magazine Feb 2022 issue. by John Morrow Jr. Dr. Morrow the Franklin and Saye Professor of History at the University of Georgia, specializes in the history of the world wars. In 2019, he was awarded the prestigious Pritzker Literature Award for Lifetime Achievement in Military Writing. Full Review 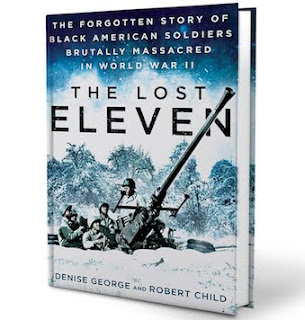 Tomorrow-Friday 2/4 as we continue to celebrate black history month catch my conversation on the Coming Home Well #podcast about THE LOST ELEVEN. It is a military history story of GIs who were brutally massacred in a #WWII war crime that was forgotten by history. LINK