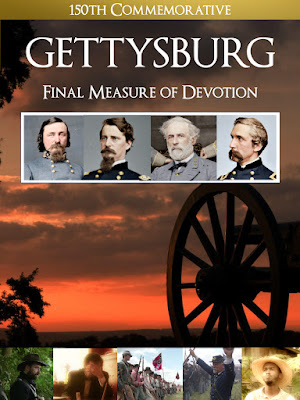 I am pleased to announce today that Gettysburg: The Final Measure of Devotion has secured a new global distribution deal with Janson Media and has debuted on Amazon Prime.

The 1-hour docudrama which I wrote and directed for the 150th battle anniversary in partnership with the Gettysburg Anniversary Committee features breathtaking, epic battle sequences from the largest Civil War battle reenactment ever staged –the 150th Gettysburg.

The event was a monumental undertaking and our cameras were there to capture the entire spectacle. We had camera people embedded in period uniform within both the Union and Confederate ranks. The viewer is transported back to 1863 within exclusive battle footage, which cannot be seen anywhere else.

The film’s storyline centers on Lincoln and the trials and tribulations he endured throughout the conflict and the war. Lincoln was frustrated that Union forces did not put away the Confederate Army when they had them on the ropes. He said, “We only had to close our fingers and the war would be over.”

The film features on screen commentary by Civil War theatrical director and friend, Ronald F, Maxwell (Gettysburg, Gods and Generals) who also narrated my Lincoln and Lee at Antietam film. Also appearing throughout is foremost Lincoln scholar, Allen Guelzo, who is the Director of Civil War Era Studies at Gettysburg College and author of numerous books on the Civil War including Gettysburg: The Last Invasion winner of the Guggenheim-Lehrman Prize in Military History.

Gettysburg: The Final Measure of Devotion is a captivating production that we are proud to have in global distribution with Janson Media. Check it out when you have the opportunity.