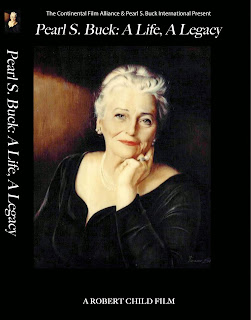 The film I wrote and directed last year for the Continental Film Alliance based in Doylestown, PA is a biographical portrait of the first American women to be awarded both the Pulitzer and Nobel prizes for literature.

This project was actually four years in the making as I had been invited to the Pearl Buck Foundation and historical site in Buck County to determine if "there was a story to be told". There most definitely was and myself along with my co-producers, Robert G. and Robert E. Campbell, of the Continental Film Alliance got down to work. This was a departure for me from my mainstays of war and history but a refreshing one in both the writing and execution of the film. I am exceeding proud of the final result and many folks who have seen it are quite emotionally moved for which I am gratified and humbled. I wanted to do justice to Pearl Buck and it was quite a tall challenge I set for myself; bring this literary icon to life, humanize her, cheer for her and cry with her and ultimately make you a devoted fan of hers. You can judge the final result for yourself when you hopefully tune in March 26th at 7P to WHYY in Philadelphia. If you can't wait the DVD of the film is is currently now on sale at Amazon.com as well as the Pearl S. Buck house gift shop in Bucks County. I'd recommend a trip there to see the site as well as meet the folks who are keeping her legacy vibrant and alive. It's well worth the trip!
Saturday
Posted by Robert Child
0 Comments
Tag : Pearl Buck, Writing