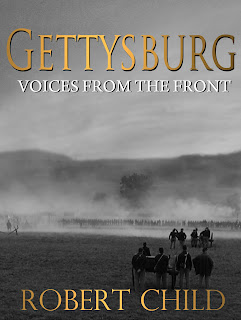 This is a compilation I have  been wanting to do for a long time. Over the past decade I have written and produced two films on the battle of Gettysburg and am producing my third and final one, Gettysburg: Final Measure of Devotion, this year. During all that time in doing my research I have compiled volumes of first person accounts, letters, diaries and dispatches that have helped me support the narrative and the stories I wanted to illustrate.

First person accounts are the living link we have to what occurred at Gettysburg. And although some of the accounts may be less than accurate due to the various authors seeing only their narrow view of the conflict and having limited information - they still bring to life the battle in a deeply personal way.


And I wanted to give that history a voice uncluttered by modern interpretation. There is, of course, great value in the modern view of the battle and I highly recommend the epic history effort by my friend, Allen Guelzo, Gettysburg: The Last Invasion, releasing this month. (May, 2013). But to gain a sense of the chaos and uncertainty in the moment at Gettysburg in 1863 you have to return to the words of the soldiers who were there.
You could call this an immersive type of history as I have woven the first hand accounts together with photographs so that the story unfolds in a linear way. As you read hopefully you will discover the battle wrapping around you with all the intense emotion, fear and uncertainty on both sides. A Union victory was far from a foregone conclusion at Gettysburg and these words from two centuries ago bring you closer to that history and those times.

I hope you'll take a moment to check it out at an online retailer.