Posted by : Robert Child Saturday
I am delighted and very proud to announce one of the premiere guests of my soon to debut Point of the Spear podcast, preeminent Lincoln Prize-winning author, historian, and distinguished professor Dr. Allen Guelzo. Allen and I had worked together on projects stretching back to 2005 when he participated as one of the historians in the Lincoln and Lee at Antietam film, narrated by Ronald F. Maxwell.

On the podcast episode, Allen and I will be discussing his forthcoming book, Robert E. Lee: A Life (Knopf) which is releasing on September 28, 2021. The book is already receiving widespread praise.

"Allen C. Guelzo has written exactly what the nation urgently needs right now--an example of mature thinking about complex, flawed people who took difficult actions in contexts, not of their making or choosing. In today's blizzard of facile, overheated, and grandstanding judgments about the past, this unsentimental biography illustrates the intellectual responsibility that the present owes to the past."

"Allen Guelzo confirms his place in the top rank of Civil War historians with his masterly biography of Robert E. Lee. Well-researched, well-written, and captivating, it will stand as the definitive single-volume life for decades to come. Guelzo's judicious comments on Lee's 'crime and glory' might be a good place for America to start healing her present-day wounds."

Allen and I will be recording our conversation on his Robert E. Lee book soon and look for the podcast episode's release in September. More podcast guests will be announced in the coming weeks, and a complete schedule will be posted soon. 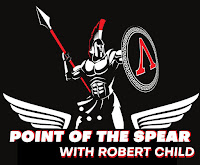 I hope you will subscribe to the Point the Spear podcast, which will be available on Spotify, Apple Podcasts, Castbox and many other platforms beginning in mid to late August. Also look for more exciting announcements soon.