Coming up this week October 13th on Point of the Spear 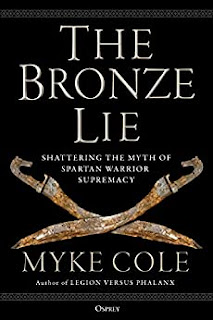 Join me on Point of the Spear this week for a conversation with author, secu­rity con­tractor, gov­ern­ment civilian and mil­i­tary officer, Myke Cole. His career has run the gamut from Coun­tert­er­rorism to Cyber War­fare to Fed­eral Law Enforce­ment. He’s done three tours in Iraq and was recalled to serve during the Deep­water Horizon oil spill.

On the episode we discuss his latest book, The Bronze Lie . which explores the Spartans' arms and armor, tactics and strategy, the personalities of commanders and the common soldiery alike. The book looks at the major battles, with a special focus on previously under-publicized Spartan reverses that have been left largely unexamined. The result is a refreshingly honest and accurate account of Spartan warfare.