New Documentary Project, No Warrior Left Behind: The Untold Story of HC-7

I am delighted to announce a new documentary film project is underway in association with the Naval Helicopter Association Historical Society. No Warrior Left Behind: The Untold Story of HC-7 is the first Vietnam War project I have undertaken, but I have wanted to write and direct a Vietnam War film for a long time. This project is perfect for me as it highlights courage and sacrifice in a naval squadron whose story is not well known.

The Story in Brief: 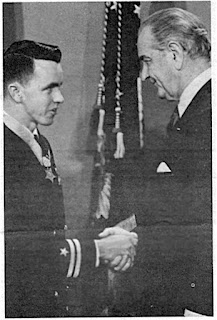 A naval helicopter combat support squadron (HC-7) in Vietnam whose primary mission became search and rescue. Each harrowing mission often through hostile fire always in enemy territory redefined the mantra, “leave no warrior behind.” Among the tenacious airmen who flew these oftentimes one-way missions was Clyde Lassen. (photo on left) He was only one of two naval aviators to be awarded the Congressional Medal of Honor in Vietnam. By the end of the war, the squadron had rescued nearly150 grateful aviators from People’s Democratic Republic of Vietnam (PDRV) and the Gulf of Tonkin. That stellar performance established HC-7’s reputation as “the most highly decorated squadron in Naval Aviation history.”

By September 1967 when HC-7 was established, Vietnam was fast becoming the “helicopter war.” It is the defining mode of transport and image that remains in the minds of most Americans today. These birds brought men into battle and carried them home.

The role of HC-7 was CSAR (Combat Search and Rescue) and the task was not for the faint of heart. The Navy lost an average of two SAR aircraft for every three aircrews rescued and one SAR crewman killed or captured for every two aircrews rescued. Many more rescues were attempted than succeeded.

Undaunted by those odds, aviators of HC-7 performed their duties with courage and determination. They knew what was at stake. A captured American pilot faced torture, isolation, and many times death at the hands of the fanatical North Vietnamese.

With the passage of time, we are losing these naval veterans, the survivors, and their stories. No Warrior Left Behind preserves the inspiring tales of a combat rescue squadron whose sole purpose and mission were to bring our warriors back home.