July is Sizzling on Point of the Spear 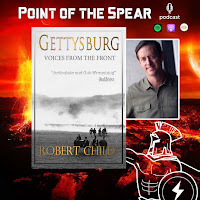 Point of the Spear kicked off the month with director Ron Maxwell, which led into our two-part Gettysburg narrative program, Voices from the Front, to commemorate the 159th anniversary of the Battle of Gettysburg. It is another in our series of story-telling specials. First person accounts are the living link we have to what occurred at Gettysburg. And although some of the accounts may be less than accurate due to the various authors seeing only their narrow view of the conflict and having limited information – they still bring to life the battle in a deeply personal way.  PLAY EPISODE. 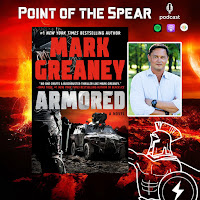 Then Mark Greaney returned to Point of the Spear to discuss his new book, Armored. July is a big month for Mark; his fantastic-looking Gray Man movie starring Ryan Gosling and Chris Evans debuts in theaters on July 15th and migrates to Netflix on July 22nd. PLAY EPISODE. 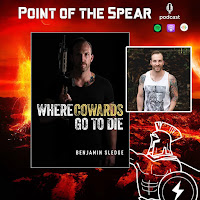 This week on July 13th, author Benjamin Sledge stopped by the podcast. Ben is a wounded Special Operations combat veteran with tours in Iraq and Afghanistan. He is the recipient of the Bronze Star, Purple Heart, and two Army Commendation Medals. In a powerful interview, he discusses his latest book, Where Cowards Go to Die. PLAY EPISODE.

Second Half of July:

Next week on July 20th, retired Marine Major Fred Galvin comes to Point of the Spear to talk about his riveting new book, A Few Bad Men: The True Story of U.S. Marines Ambushed in Afghanistan and Betrayed in America. The book tells the incredible true story of an elite team of U.S. Marines set up to take the fall for Afghanistan war crimes they did not commit—and Major Galvin's 14-year fight to redeem his men. Galvin's interview is another Point of the Spear episode you won't want to miss.

We close out the month on the 27th with Dr. Samuel Mitcham and his remarkable new book, The Encyclopedia of Confederate Generals: The Definitive Guide to the 426 Leaders of the South's War Effort. You'll definitely enjoy this episode if you're an avid Civil War buff. Mitcham documents the lives of every Confederate general from birth to death, highlighting their unique contributions to the battlefield and bringing their triumphs and tragedies to life.