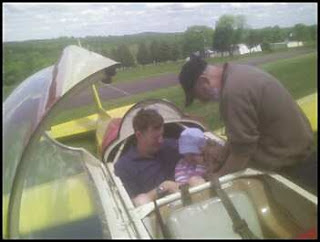 It may seem odd or perhaps not that the director of Silent Wings which seems to have become the definitive account of American glider aviators during WWII had never flown in a glider. Yes, that was true at least until yesterday.  My wife had gotten a ride in a glider at a local small airport for my father-in-law as a birthday present. He loved it. While we were there he said...why don't you go up?  And I thought "it's about time". So I took my oldest daughter with me and we had a blast. It was quite a feeling of freedom and a lot of fun.

I kept thinking, however, that I still cannot imagine the fear that WWII glider pilots had to suppress. First they knew it was a one-way mission, no one was waiting with a bus to take them back across the lines. Second they had no idea where their landing field would be or if it would be clear of obstacles.  And third, for most of their sortie they were being shot at with the bullets and worse slicing through the canvas fuselage.  It goes without saying that indeed I have even greater appreciation of the accomplishment of WWII glider pilots!
Share This