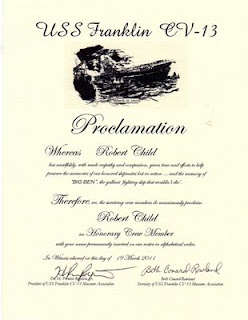 This has been quite a humbling yet extremely proud week in my professional career. I was just notified that I have been made an honorary member of the incredibly heroic USS Franklin (CV-13) crew the most decorated sailors in US Naval history.

Emotions run deep, still today, in the surviving men of the USS Franklin. The carrier, known as “the ship, which wouldn’t die”, survived a direct hit by a Japanese armor-piecing bomb just 40 miles off the coast of Japan in March 1945 and was eventually able to return under her own power to New York for repairs.

The enemy bomb took more then 700 lives in an instant and the ensuing explosions from the Franklin’s own arms stores turned her into a deadly fireworks display that blasted hundreds more men over the side 90 feet into the cold Pacific.

In directing and co writing the film, USS Franklin: Honor Restored, at the same time I was directing, The Wereth Eleven, I have gotten to know, albeit at a distance, some of the finest men ever to wear the uniform of the U.S. Navy.

The Franklin’s story, the men’s story, had never been told only hinted at in anguished personal accounts captured by author, Joseph Springer, in his book INFERNO

. Joe and I co-wrote, USS Franklin: Honor Restored, and Joseph Small of the Ardennes Group produced the film to set the record straight.

And the letter I just received the President of the USS Franklin Museum Association, H. Prentice Baptiste, cited this. He wrote, “We wish to extend to you membership as a full fledged crew member of the USS Franklin for your work in setting the record straight of the heroic effort in saving one of the great ships of the U.S. Navy in World War II.” 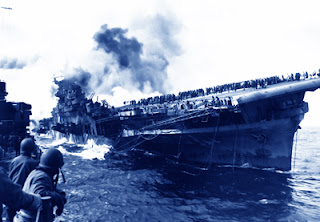 That, “setting the record straight”, meant revealing the story of the men who hit the water or were transported off the ship unconscious or too wounded to stand becoming known as the “wet soldiers” and the subject of Captain Lesley Gerhes rage. He insisted that no order was given by him to abandon the ship and that any man who had not remained – had deserted his post – no matter what his condition. And Capt. Gerhes instituted a sweeping court marshal.

It went as high up as the Secretary of the Navy, James Forrestal, but all crewmen were eventually cleared of all charges. The shame, however, of being labeled a “deserter” was a burden these proud men continued to carry their entire lives. Several crewmen have stated plainly to my co-writer, Joe Springer, “Now that the story has been told I can die in peace”.

Being named a crew member of the USS Franklin is the most humbling honor I have ever received in my professional career as it signifies the work I have created has had a profound personal impact in people’s lives.  Not every film has the opportunity to do this but I am grateful and again honored and truly humbled that the effort on behalf of the Franklin’s crew, of which I am now a part, will shortly be seen by the world. USS Franklin: Honor Restored, narrated by Dale Dye, releases this summer.
Share This