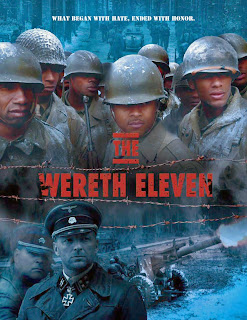 The Wereth Eleven was honored with the Founders’ Choice Award at the Fifth Annual GI Film Festival at the United States Navy Memorial in Washington, D.C.
Washington, D.C. – May 17, 2011 – The epic docudrama, “The Wereth Eleven,” was featured and honored as “Founders’ Choice” at the prestigious Fifth Annual GI Film Festival in Washington, D.C. The film is based on the heroic story of the escape made by 11 American soldiers at the start of the Battle of the Bulge during World War II.

“The Wereth Eleven” was one of 31 films to premiere at the GI Film Festival held at the United States Navy Memorial between May 9 and May 15 to honor the heroic stories of the American Armed Forces and the worldwide quest for freedom and liberty.

Narrated by “The Closer’s” Corey Reynolds, “The Wereth Eleven” tells the true story of 11 soldiers of the segregated African-American 333rd Field Artillery Battalion who dramatically escaped German soldiers after their unit was overrun. Their 10-mile trek from their battery position to Wereth, Belgium led them to refuge with a Belgian family until a Nazi sympathizer revealed their presence to an SS Reconn Patrol. The soldiers surrendered, but were taken to a field, where they were tortured, maimed, and shot on Dec. 17, 1944. The killings were investigated, but never prosecuted.

“I’m truly speechless,” expressed Robert Child, director and writer of ‘The Wereth Eleven,’ in reaction to the film winning the award. “I’m so appreciative of our fantastic team, including Joseph Small’s vision and Frederic Lumiere’s expertise. Our guiding principal was to make a film worthy of the eleven men within the Wereth story - and I accept this award on behalf of those men.”
The powerful and poignant film is an epic docudrama with stunning Hollywood-grade visual effects, interviews with witnesses, and archival footage.

“The Wereth Eleven” was produced by The Ardennes Group with executive producers Small, Child, and Lumiere. The film was directed and written by Child, and edited by Lumiere: producer, director and editor of the groundbreaking Emmy Award-winning series “WWII in HD,” narrated by Gary Sinise.

About The Ardennes Group
Launched in 2009 by CEO Joseph Small, The Ardennes Group develops and produces historical military documentaries and films. The company’s productions include the World War II docudrama, “The Wereth Eleven,” which premiered nationwide on National Geographic Channel (credited as “Caught by the SS: The Wereth Eleven”) and the soon-to-be released war documentary, “USS Franklin: Honor Restored,” based on Joseph A. Springer’s book, “INFERNO: The Epic Life and Death Struggle of the USS Franklin in World War II.”
Share This