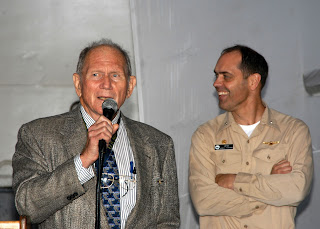 I did not want to let this day pass without writing that I had the distinct honor of meeting and conversing with retired Rear Admiral, Earl P. Yates, this morning. He was the first Commanding Officer of the USS John F. Kennedy (CV 67) aircraft carrier. Admirmal Yates had watched the USS Franklin: Honor Restored film last evening and said he truly enjoyed it. In fact he shared a funny story of actually boarding the Frankin, at Ulithi in the Pacific pretending to be part of her crew just because he wanted to see the carrier up close.

He is one of the few people I have met in the military who served in WWII, Korea and Vietnam. And on this Thanksgiving I am thankful to men like him who have protected our country on the front lines and served with honor and distinction. 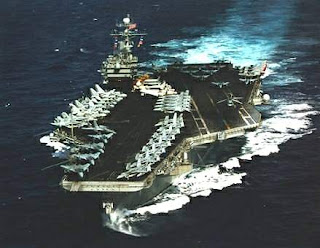 The USS John F. Kennedy, nicknamed "Big John." Kennedy was originally designated a CVA (fixed wing attack carrier); however, the designation was changed to CV to denote that the ship was capable of anti-submarine warfare making her an all-purpose carrier.


After nearly 40 years of service in the United States Navy, Kennedy was officially decommissioned on 1 August 2007. She is berthed at the NAVSEA Inactive Ships On-site Maintenance facility in Philadelphia, Pennsylvania. Admiral Yates shared with me that hopefully soon the carrier will have a new home as a floating museum at a location in New England.
Learn more about the carrier HERE.
Share This