A PBS Civil War DVD Collection for the Holidays 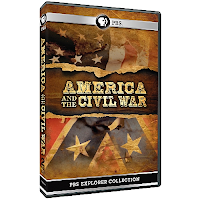 I would like to alert all Civil War enthusiasts to a 2 Disc, Civil War DVD box set that PBS just released which is a perfect gift for the holidays, America And The Civil War. My, Gettysburg The Boys in Blue and Gray, film heads the collection of five signature films from PBS's top series' NOVA and American Experience.


“There is no doubt in our minds that Gettysburg The Boys in Blue and Gray is one of the finest programs we have seen about the Civil War. The music accompanying the film is simply incredible and adds a great finishing touch to what is an already compelling film.”
- Steven Thum and Elaine Larson, South Dakota Public Broadcasting

If you are going to get just one DVD for the Civil War lover in your life this Christmas this collection would be it. It features over 450 minutes of award winning program material. Note the details below.

Disc 1 (227')
Gettysburg: The Boys in Blue & Gray - Discover the sweeping epic story of the Battle of Gettysburg, as experienced by the soldiers who were there.

American Experience: John Brown's Holy War - Martyr, madman, and murderer, John Brown was as controversial and misunderstood in the mid-1800s as he is today.

NOVA: Lincoln's Secret Weapon - The Union's USS Monitor was a decisive factor in the Civil War. Now, join a team of Navy divers as they attempt to recover the priceless artifacts.

Disc 2 (231')
American Experience: The Massachusetts 54th Colored Infantry - The historical narratives and archival photos in this fascinating documentary reveal the real story of the heroic African American regiment dramatized in the movie Glory.

America Experience: Reconstruction: The Second Civil War - Spanning the years from 1863 to 1877, this dramatic mini-series recounts the tumultuous post-Civil War years, as America struggled to rebuild.

This DVD features subtitles in English (SDH) Purchase at shopPBS.com
Share This