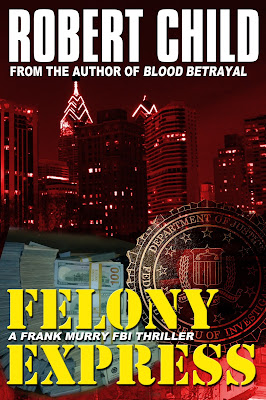 Fans of FBI Special Agent, Frank Murray will be delighted to learn that a 2019 release date for the second book in the Frank Murray FBI Thriller series has just been announced. Pre-orders go on sale early next year.

Felony Express the follow up to, Blood Betrayal, sees agent, Frank Murray, transferring from OC (Organized Crime) to the Philadelphia FBI Office, Drug Squad. Based on a true story and set in the early 1990s Frank transfers in at the height of the drug-related homicides in Philadelphia. The Junior Black Mafia (JBM) has cornered the cocaine trade in the City of Brotherly Love into the hundreds of millions of dollars. With that much money on the line, the matching violence has spun completely out of control.

One man, Rick Jones, leader of the JBM controls the vast majority of the cocaine trafficking from Miami and South America. Murray sets his sights on bringing the elusive drug kingpin down. Jones has evaded capture for more than two years with PHPD, DEA and even the IRS failing to get a conviction against him. Murray's new drug squad supervisor doubts Frank will fare any better so he offers Murray a deal than any sane FBI agent would refuse —but not Frank Murray.

At the same time, a west coast drug kingpin establishes a multi-city cocaine distribution network including Philly unbeknownst to PHPD, the DEA or the FBI. The kingpin's lucrative drug trade only comes to light when an overnight express parcel bound for Los Angeles rips open at Philadelphia International Airport spilling out over $285, 000 in cash —the kingpin's weekly haul.

The FBI and DEA get pushed to their operational limit and Frank Murray has to dig deeper than he ever has before to combat the overwhelming mayhem and violence. He puts himself so far out on a limb that there may be no coming back this time.