I am excited to announce coming in 2019 I will be launching a new Political / Military Thriller Series, which has been in development and percolating for three years. This thriller series features a brand new main character, Jake Hamilton.

At 38, Jake Hamilton is a veteran, retired (SOO) Special Operations Officers in the elite Marine Recon Special Ops Raider Unit. Six foot three dark-haired and a six-time Iron Man qualifier he can still mop the floor with men ten years his junior. He enlisted in the Corps post 9/11 and was selected for Recon when they reorganized in 2006 forming three elite battalions. Jake is former 2nd Battalion and his unit based at Camp Lejeune adopted the Raider name in homage to their proud WWII heritage. Marine Raiders in WWII in the South Pacific were elite, light amphibious units that struck deep into enemy territory causing death, havoc and destruction in the enemy ranks. They were feared independent, patriotic and proud. Which are the same qualities Jake Hamilton possesses.

Rogue Soldier introduces us to Jake Hamilton and the series. In this nail-biting first installment a Marine in Jake's former unit who served in Afghanistan has gone rogue.

The man a troubled (SOCS) Special Operations Capability Specialist  expert in explosives is deep into shadow government conspiracy theories and researching black ops.  The rogue soldier determines he has been fighting for the wrong side and decides to give the country a national wake up call using his expertise in military grade explosives and taking hostages at a national VA hospital.

Jake Hamilton, the man's former commander, is pressed back into service as a high-level negotiator. The situation spins completely out of control and before all is said and done Hamilton will question which side he should be fighting for.

The President of the United States receives on average 30 threats on his life every single day via text, social media, phone and email. That amounts to  over 10,000 death threats per year.

The vast majority are not credible. But even the small percentage that warrant serious investigation number in the hundreds.

President Sloan is no stranger to daily threats on his life. But when cryptic threats begin reaching him in highly secure areas in unexplained ways suspicions of a deep-state military coup move to the forefront.

Jake Hamilton is inserted to find and eliminate the threat as the messages morph into a race against time —simply listing the date, hour, minute and second of President Sloan's execution. 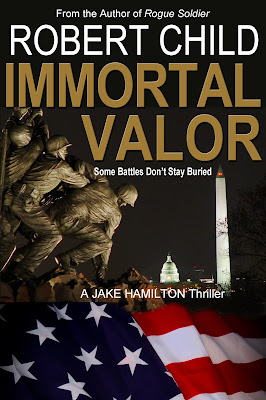 The Marines are one of the proudest branches in the U.S. military.  The Marine Raiders which originated in WWII in the South Pacific striking deep in enemy territory causing death, havoc and destruction in the enemy ranks are no exception.

Victory has a cost and sometimes that cost is paid with silence. One WWII Marine Raider veteran who has kept quiet for nearly 75 years decides not to take his secret to the grave.

Jake Hamilton is dispatched and reminded that he is duty bound to protect the honor and integrity of the Corp.  What he discovers will shatter his world and make him question his life long patriotism.

I am very excited to launch this series which I intend to be multi-volumed and long running.  Many know that I have a keen interest in the military and military history in particular. My ancestors served in both the Civil War (Gettysburg, Fredericksburg) and the American Revolution (Dorchester Heights, Lexington and Concord). Thomas Child in the Civil War and Jonas Child in the American Revolution respectively.

In addition I have written and directed several nationally telecast, award winning and Emmy® nominated films about various American wars. With this series I intend to expand on those films by tying that love of military history to edge of your seat political and military thrillers.

First and foremost I consider myself a patriotic American and this series which I am labeling a "Modern Patriot" series addresses how America exists today. In my lifetime I cannot recall another time so divisive. People on both sides are passionate about what they believe which is a very good thing. My caution is we need to look beyond that passion into agendas. Dig deep, do your own research and really determine why someone stands for what they say they stand for or if their true motives run counter to everything you believe. It is a noisy time to be alive that is for sure but what I believe will win the day and change the direction of the world is exactly what we see happening —giving power back to the people. A single person's vote has never been so powerful not just in America but around the world. Exercise that right and we can all change the world.
Share This