Hamilton at War Gets a New Cover 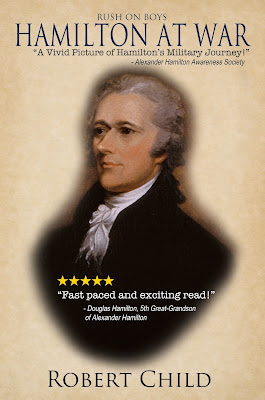 I am excited to unveil today the new cover for my book, Hamilton at War. The novel has been out for a while but with all the excitement around the smash Broadway musical of Hamilton I thought my book needed some freshening up. The story has been read and praised by a number of people including Alexander Hamilton's 5th Great Grandson, Douglas Hamilton. I was humbled and grateful for his comments on the story which took a couple years to write and actually began life as a screenplay.


Synopsis:
As the story opens, young Alexander Hamilton marches with the Continentals at Fort Lee, New Jersey. He is frustrated by being relegated to the end of the line and missing out on the action. He desperately wants to make a name for himself. His fortunes soon change at the Raritan River when the vanguard of British infantry catches up to Washington's army.

With the end of the American Revolution looming and his visions of his own glory fading, Hamilton becomes determined to leave Washington s staff and return to the battlefield. Washington, the only man who can help him, does all in his power to deny him. One daring assignment remains, however, that will determine the outcome of the final battle and the entire war. It is at a place called Yorktown.