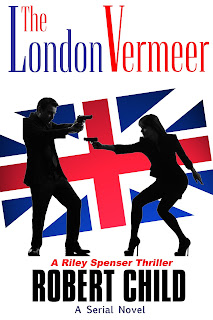 Pleased to announce my latest crime thriller release which came out earlier this week, The London Vermeer. It is the first part of a three part serialized novel and the continuation of the Riley Spenser series which began with, The Russian van Gogh. The book is also part of Kindle Unlimited so if you have an Amazon Prime account you can get it for free.

Forensic Art Detective, Riley Spenser, returns in this fast-paced follow up to the, Russian van Gogh. With the $300 million dollar van Gogh returned safely to the Amsterdam Museum Riley relocates to London. She heads up the new Monuments Men UK office where her mission expands from locating stolen WWII masterpieces to contemporary art theft. Her primary mission is tracking leads in the 1990 Gardner heist.

In this first installment of the three-part serialized novel an alarming development occurs. Riley's boss in the States calls with some shocking news. The Boston FBI has identified the original culprits in the Gardner theft. Riley is devastated but soon realizes that the FBI has no clue where the paintings actually are. This is simply a ruse to flush the thieves out of hiding.

Unfortunately for Riley it works. She has been the most visible investigator into the crime for the past 15 years. The Gardner thieves have have zeroed in on her as the pawn they need to secure an even bigger score than the Museum's standing offer of $5 Million for return of the paintings.

To make matters worse Justin is recalled from assignment in the Middle East. His covert mission has gone terribly wrong and he fears reassignment, demotion or worse. His SIS supervisor encourages him to take a few days off but Justin ends up in exactly the wrong place at the wrong time. Filled suspense, The London Vermeer, features action that jumps off the page like a major motion picture and a storyline filled with twists and turns that will keep you guessing from one page to the next.